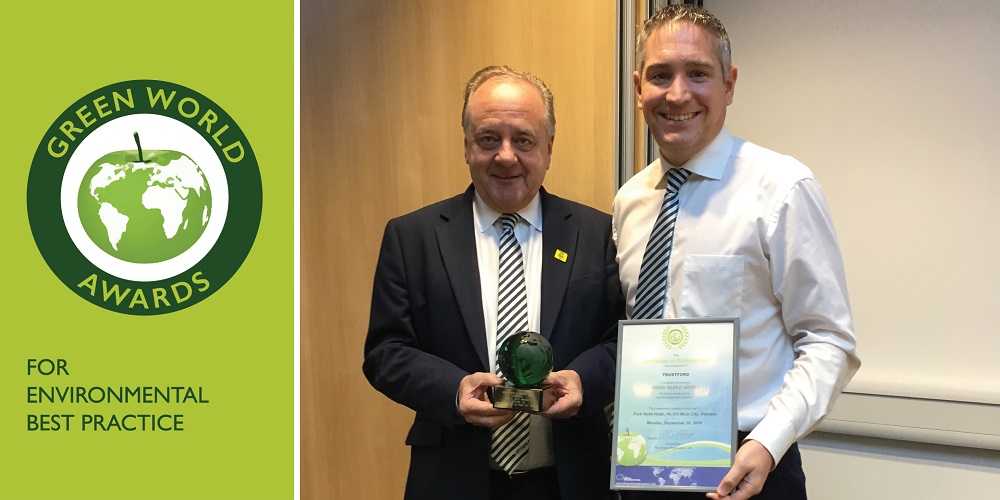 TrustFord has again been acknowledged for the 5th consecutive year, for its commitment to environmental best practice in The Green World Awards 2019.

The Green Apple Environment Awards promote environmental best practice and celebrates organisations that have made a positive impact on the environment and are working to improve sustainability.

Stuart Mustoe, Finance Director at TrustFord (pictured above with Chairman and Chief Executive, Stuart Foulds) said “It’s an honour to be recognised again by the highly respected Green Organisation, who were particularly impressed with how we put our people at the heart of sustainability.”

Purchase Direct’s Energy Management Programme has been central to TrustFord’s achievement of the Green Apple Award over the last five years.  The programme which was launched in 2013 monitors all TrustFord’s utilities including gas, electric and water, and has been rolled out across all 60 TrustFord locations.  It has resulted in significant reductions in carbon emissions and has achieved current energy savings of 22% across the business.

The award win demonstrates the continued dedication to environmental best practice at TrustFord, which they continue to build on to ensure they are doing all they can to protect our environment.

Purchase Direct is one of the leading providers of expense reduction services in the UK, providing major cost-saving purchasing solutions to businesses in Telecoms, Business Utilities, Procurement and beyond.